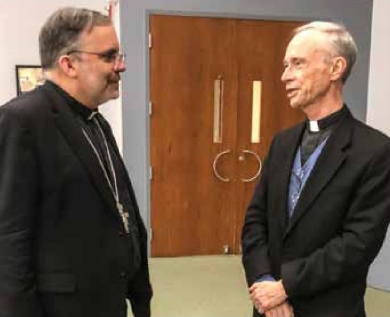 “Religious freedom isn’t just for Christians,” he said, but can also apply to non-believers and atheists. Freedom of religion includes the freedom to believe and to gather for worship, which Father Reese described as an absolute minimum.

Public safety, however, can limit religious freedom, Father Reese said, pointing out that such things as human sacrifice, slavery and polygamy might not be prohibited in certain religious traditions, but are prohibited by human rights. While those traditions are far-fetched in 21st century American culture, such things as zoning rights, permits, and building codes are not. When the Americans With Disabilities Act was signed in to law by the late-President George H.W. Bush in 1990, Catholic bishops were in favor of the reforms, “but what about churches?” Father Reese asked. The language of the ADA exempts liturgical spaces, but the discussion illustrates the intersection of religious freedom and the public good.

Father Reese moved the discussion to the roots of the problems with freedom of religion, pointing out that the issues include historical anti-Semitism, and the hatred between Shia and Sunni, Catholics and Protestants, and the desire of one group to impose its views on the other. Often, he said, these conflicts also appear to have political, economic and cultural roots. He displayed a map of Nigeria that highlighted the geographic areas of cultural diversity and described conflict between cattle rangers and farmers, groups that differ in both economic s and religion. Father Reese said that if a cow wandered into a farmer’s field, and began munching on a crop and the farmer shot the cow, that action could be construed as a religious conflict that might be more properly described as economic. “I’m worried about Nigeria,” he said. The country is neutral but its citizens are divided.

If that is the case, what can churches do? He asked.

“We can teach respect for other religions, and the Catholic Church is a leader here,” he said. “We dialogue with everybody!” That custom of dialogue needs to begin at the local level, Father Reese said.

What might be perceived as a l ack of religious freedom in the United Sates is nothing like that which is experienced in countries where persecution is common, but Father Reese addressed the sometimes thorny issue of moral conscience. The name “Kim Davis,” familiar to Kentuckians, brought the issue into sharp focus as Father Reese briefly described the experiences of government employees who must be non-discriminatory in carrying out their duties. Davis’ loss of the office of county clerk in Rowan County, KY indicates that the voters in Rowan County prefer a clerk who abides by the law that requires the county clerk to issue marriage licenses to same-sex couples despite her belief that such unions are prohibited by God.

Government funding comes into play concerning moral decisions, which is the reason that the church has stepped aside in areas of adoption and foster care. Before the legalization of same-sex marriage, Catholic adoption agencies relied on a “don’t ask, don’t tell” policy concerning support systems of adoptive parents. A man seeking to adopt could say that he has a support system to help raise the child, but if that “support” is a spouse, a Catholic agency cannot recognize them as a married couple. The agency therefore loses the federal funding it needs for operation.

Spousal benefits, standards of conduct, and the right of businesses to select the customers and situations they will serve based on moral objections are all par to the discussion concerning religious freedom in the United States.

The focus on such issues as gay and reproductive rights shifted after Barrack Obama left office; Donald Trump’s administration is working to reverse regulations and appoint conservative judges. “And what will the next administration bring?” Father Reese said. “There will be a continual cycle of change. Public opinion matters, but what is sustainable?”

The public is divided on many of these issues, but “where are the compromises?” Father Reese asked. “Compromise is the art of the possible, but it’s difficult to reach and I don’t think either side is interested in compromise. And that’s not good for the country.”

Father Reese also appeared at Kentucky State University in Frankfort on December 4, as part of an expansion of the mission of the Newman Foundation, Inc. NFI was established in the late 1960s as an independent, non-profit corporation that seeks to deepen and integrate the spiritual, intellectual and personal development of the Newman Apostolate of the Diocese of Lexington, according to its website. Although the foundation was originally established in connection with the University of Kentucky in Lexington, its mission in the 21st century is expanding to include all public universities, both two-year and four-year.

The Distinguished Speaker Series is a long-time ministry of NFI with a tradition of inviting scholars, writers and thinkers to share Catholic intellectualism on secular college campuses.

NFI president Jan Swauger said the foundation is currently seeking input from the community about speakers they would like to see in the future.

“[The topic of] religious freedom isn’t just for Catholics, but for the intellectual community, people of any faith and people of no faith,” Swauger said.

Father Reese writes a regular column, “Signs of the Times”, for The National Catholic Reporter and is the author of three books: Inside the Vatican: The Politics and Organization of the Catholic Church; Archbishop; and A Flock of Shepherds. He was appointed to U.S> Commission on International Religious Freedom by President Barrack Obama in 2014 and was elected chair in 2016. His appearance in Lexington and Frankfort was co-sponsored by NFI and the UK Cottrill-Rolfes Chair of Catholic Studies.